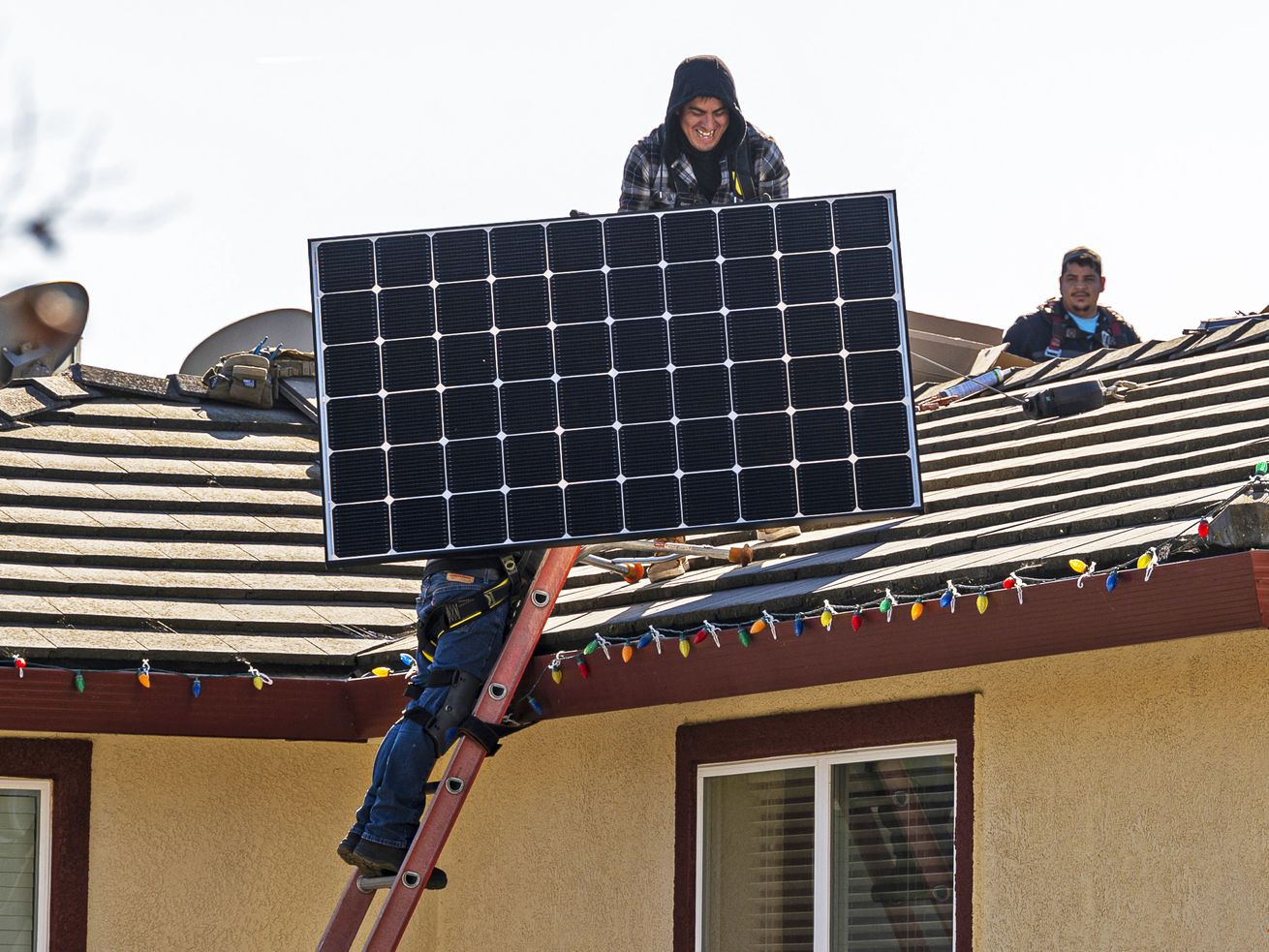 Solar contractors lift solar panels onto the roof of a home in Hayward, California, on February 8. | David Paul Morris/Bloomberg via Getty Images

Make a home energy audit your resolution for 2023.

On January 1, Americans became eligible to save thousands of dollars when they buy electric cars, induction stoves, and modern appliances under the Inflation Reduction Act that Democrats passed last fall.

Most American homes still use fossil fuels, specifically natural gas, for heating, cooking, and hot water. To reach the Biden administration’s goal of slashing buildings’ climate footprint in half by 2032, many of those homes will need to be electrified. Swapping out the gas stove for induction and a natural gas furnace for an electric heat pump plugs the building more fully into the electric grid. Today, that grid might still be powered by some coal and gas, but years from now, it will run predominantly on clean energy like wind and solar. Electrifying homes now is key to reducing the US carbon pollution in the decades to come.

A major part of the new law’s $369 billion for climate initiatives is rebates and tax credits aimed at helping consumers switch from fossil fuels to electricity. While the IRA also includes big payouts for utilities and manufacturers to boost a cleaner economy domestically, the consumer incentives address a different set of problems — rising energy bills, and tackling the most stubborn sources of greenhouse gas pollution.

Not everyone will need to replace their furnace, car, or stove in 2023. But even if you aren’t planning to do so, or you don’t own your home, there are ways the IRA’s incentives can apply, and it’s important to start thinking about them early to take full advantage.

Home renovations are a big investment and difficult to time right. The worst case is to find yourself with a broken system and long wait times for a contractor, let alone one who’s up to date on the best available technology. That’s why if you’re going to make one goal for 2023, it should be to evaluate what you have and what you’ll need.

“Embrace the notion that electrification is what we all need to do eventually,” said Craig Aaker of Green Savers, an Oregon-based home performance contractor. There’s no point to upgrade a furnace, unless it’s switching to a heat pump, he added: “At this point, I certainly wouldn’t spend any money fixing a furnace if it goes out. Just take that money and turn it into an investment.”

The best place to start is an energy audit, which identifies where your home is inefficient, any problem areas like drafty windows, and any fixes that could make it cost less in energy bills and more comfortable. A professional one will run around $150 (though the Department of Energy has a guide for a DIY option). Not all of the suggestions are expensive upgrades, and probably fall under one of the categories of improvements eligible for tax breaks.

“The nice thing about the Inflation Reduction Act is it effectively creates an electric bank account for every household in America that they can access when the time is right for them,” said Ari Matusiak, CEO of the electrification advocacy group Rewiring America.

Just some of the tax credits available in 2023

There are two main buckets of incentives available — tax credits that can be redeemed when you file your taxes the following year, and rebates that lower the upfront cost of installation and machines.

Tax credits will last through 2032 without any cap on their cost, barring a dramatic reversal by a future Congress. Some funding for rebates is set aside for low and middle-income people, those earning between 80 and 150 percent of an area’s median income, and does have a cap on spending, so the law may run out of money before the 10 years are up.

Some rebates might not kick in until later in 2023, because states have to set up their own programs and guidance for who qualifies. For lower-income people earning less than 80 percent of an area’s income, the rebates will eventually cover most if not all of the costs of the technology and installations. Middle-income people, earning between 80 and 150 percent of an area’s income, would see a portion of the costs covered. The rebates will be an upfront discount, offered at sale.

More information on rebates is coming in 2023. For now, the tax credits are available, and can be a little complicated. Some are capped based on cost and income levels, or, like the 25C tax credits, apply to multiple categories.

If you want to dig into these tax breaks further, Rewiring America has a useful guide, and the White House has a dedicated website to unpacking the IRA. The other page to bookmark is the IRS guidance, which will be updated throughout the year.

Here is some of the technology you might want to think about upgrading or replacing, taking advantage of the tax credits available January 1 through the IRA:

The electrical panel, or breaker box, is the foundation for the electricity flowing into your home. The panel size matters if you’re planning on adding tons of new plug-in appliances, because older homes may have a much smaller capacity.

The tax credits cover 30 percent of the panel upgrade, capped at $600 resetting each year (this is uncapped if it pairs with a rooftop solar installation).

In the long run, rooftop solar can slash bills by hundreds of dollars each year, and come through as a backup electricity source in a storm when paired with battery storage. It’s also electricity that doesn’t contribute to the climate crisis.

Heat pumps are up to four times more efficient than the best gas furnaces, because they essentially redirect cold air from one area to another. The technology is relatively unfamiliar in the US compared to Europe, but is catching on.

There are a few different kinds of heat pumps, which are especially good to consider if you currently rely on gas for your clothes dryer, your AC, heating, or hot water.

The tax credit covers 30 percent of the cost of heat pumps for air and water, capped at $2,000 each year, but resets annually so it can be used for other projects.

Aaker, of Green Savers, explained that it’s worth considering what you have already for water heating, too. “If you have natural gas or a resistance electric water heater, which are the two most common types, you can save real money. The thing that we sell that has the highest payback is heat pump water heaters.”

By sealing doors and windows, and adding insulation, a home could be much more comfortable to live in and require less money to heat and cool. The first step to figuring out what a space needs is getting an energy audit done by a professional, who evaluates what kinds of insulation and sealing will be the most useful. The IRA offers a 30 percent tax credit back for an energy audit, and on upgrades for insulation, doors, and windows.

Battery storage can help power appliances in the home, even if there is a major storm outage. The tax credit for this is uncapped, offering 30 percent back on battery storage. The average cost is $16,000, so the average credit delivers about $4,800.

There are two relevant tax credits for new and used EVs, each with different income limits and price caps. The way it works for new vehicles is if you earn under $150,000, $225,000 as the head of household, or $300,000 for joint filers, you could get up to $7,500 off. The cars have to cost less than a certain retail price to qualify: For vans and pickup trucks, that’s $80,000; for other cars, that’s $55,000. The IRS has an initial list of qualifying cars here, and answers common questions about the new credits.

In 2024, these credits will change into upfront discounts provided by dealers at the point of sale.

There are going to be more rebates available for all the above categories, aimed at lower and moderate income levels, later in 2023. There are also added categories that will be eligible for rebates, including induction stoves, ovens, and clothes dryers.

Correction, January 3, 11:30 am ET: An earlier version of this story misstated the restrictions in place for new electric vehicle tax credits.